Image: The Localz Team picking up the winners prize.

The Localz team entered the National Australia Bank (NAB) iDay hackathon over the weekend of the 6th and 7th December and came away as winners. NAB ran the event, which was also sponsored by Visa, Intel, Deloitte Digital, Amazon, Microsoft and Adobe, and put a $10,000 prize up for grabs to see what competing teams could create by using the bank's APIs (#nabAPI) with a specific focus in the areas of Health and Agribusiness. We grabbed five minutes with Pete Williams, co-founder and Product Director to get the details.

Why did Localz enter the hackathon?

A couple of key reasons:

What was the big idea?

There were two domains NAB wanted to focus ideas on - Agribusiness and Health. We chose health because we see the impact of Australia's ageing population, record numbers of health claims via Medicare and private health insurance and a huge increase in prescription drug fulfilment. Related to these are a couple of key problems which we could solve for:

We're already doing work in the retail sector where we have deployed some relevant toolsets that we thought could be applicable in the health arena too.

How did the hack itself go?

While we had a rough idea of the areas we wanted to work on, once we mapped it all out we realised we were going to have a busy 24 hours! We worked basically non-stop other than a couple of pauses to grab some food which was pretty excellent by hackathon standards! There were a number of APIs exposed by NAB. We could see that using these existing APIs, plus combining access to other systems that NAB has, such as HICAPS would produce some great solutions.

What did you win?

There were two winners - one for agribusiness and one for health, which was us. We won $10,000 from NAB and Visa and a lunch with Andrew Thorburn, the Group CEO of NAB which we're really excited about.

What next for NAB and Localz?

We're hoping to work with NAB on bringing our concept (medipass.io) to life with them. This might be via a new initiative they have called NABLabs. There are a number of other areas where we could also assist NAB innovate across location-based payments.

Want to learn more about how Localz can help your company in the health or payments industries? Get in touch with Tim Andrew (tim.andrew@localz.com) 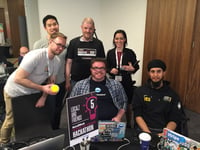 Queues? In The Future, We Don’t Need Queues