Localz at the JustGiving Awards 2015

Being part of an event such as JustGiving Awards 2015 meant a lot for the Localz team, with the special invite from our long-term partner PayPal.

JustGiving is an organisation that provides a social platform for everyone who wants to donate to a great cause around the world. On Wednesday 23rd September JustGiving hosted the JustGiving Awards 2015 at The Brewery, London. Localz were invited to join the event as guests of the sponsors of the event, our StartTank partner PayPal. 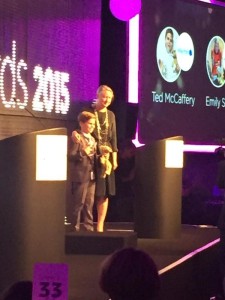 Our team member Antony Gibson, who attended the event shares with Localz that “JustGiving Awards were amazing and more importantly humbling. I was fascinated with those kids who've been through so much and raised so much money”. But the story that our colleague would remember the most was the story of an inspiring young person Ted McCaffery, who came on stage with his teddy Rufus. The young boy received the Independent on Sunday Happy 100 List Award, because he had open heart surgery at seven years old and just nine weeks later completed a triathlon to raise over £70k for Alder Hey Childrens' Hospital!

Apart from the emotional part of the evening, our team member enjoyed talking to colleagues from JustGiving and PayPal UK & Ireland team.

JustGiving Awards 2015 is an evidence of the dedication of all the people who are ready to give a hand and help others. Localz was pleased to be able to support our partner PayPal at the event, and wish the winners the best for the future.

Localz and Teradata at DMEXCO 2015

Localz is a Finalist in the Australian Supply Chain Awards 2017