Easter Egg Hunt of the Future

Easter is just a few days away and all the shops are stocked with thousands of chocolate eggs. Children around the world are looking forward to the holiday and especially the famous tradition of Easter egg hunts, with parents hiding eggs around the house or outdoors for children to find them.

However, with the advances in technology, children nowadays tend to play more digital games instead of traditional ones. This means that the old-fashioned Easter egg hunt might no longer be as appealing. How about incorporating the traditional game in a virtual one? Location technology can be used to create a fun Easter egg hunt and bring the digital world into the real one.

How does it work?

Imagine a treasure hunt game that is played via an app on a wearable device. Parents hide the Golden Egg (the treasure) somewhere in the house or anywhere outdoors, and leave clues along the way. Children hunt for the hidden egg with a map and an app, which asks them to enable location and Bluetooth settings. The clues are uncovered only if the children (with their devices) are in a close proximity to a beacon. After all the clues are collected, the location of the Golden Egg is revealed. The winner of the Easter egg hunt receives the ultimate prize. 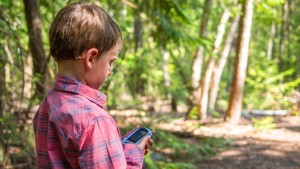 A potential spot for such a virtual location-based Easter egg hunt could be Regent’s Park in London. For example, confectionery companies could sponsor an Easter egg hunt event. The confectionary companies could create an app for the children to download, specifically designed for the event. They can then install beacons around Regent’s Park. When children are close to the beacons, clues will be revealed. The more clues collected, the bigger the chance to find the hidden eggs. What a great idea to get children involved in a fun, interactive egg hunt in the digital world we live in.

An alternative would be to hide a number of eggs outdoors and give children GPS coordinates to find them. This way, children can enjoy being in nature whilst using their devices and maps to hunt for Easter eggs.

Localz built a treasure hunt game in the past, which turned out to be a huge success. To read the full story, check out the KPMG Treasure Hunt.

Whilst in today’s more modern world many innovative games are introduced to children, old-fashioned games can still be played. This whole new dimension of Easter egg hunt keeps the tradition alive whilst adding some digital fun.

Easter Egg Hunt of the Future