Can beacons transform the gaming world?

I still remember my childhood, where phones were not part of my daily life. A time when I had to go to my friends’ house to talk to them. A time when playing games involved being outdoors with a ball in our hands.

Nowadays, the world is a bit different. Children communicate with their peers via Facebook, Twitter and Snapchat. They use their smartphones and laptops to do homework, watch videos, and read books online. Kids spend hours playing mobile or video games every day instead of being outdoors.

What if there was a way to bring back the old-fashioned games into the virtual world kids live in?

Micro-location technology is already connecting the physical and digital world within the retail industry. The possible applications of the technology are enormous. Companies are gathering together and talking to experts to find new ways of using micro-location technology to enhance the overall customer experience. If retailers can do that, so can gaming companies. 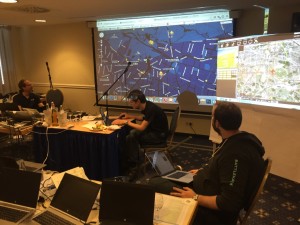 Localz created a game during the KPMG Hacknet 2015. Micro-location technology was used for a treasure hunt game, where attendees were split into groups and their mission was to find an “explosive banana drone” threatening KPMG Berlin HQ. To complete the mission, participants had to uncover clues, which were located in close proximity to beacons around Berlin. Players were equipped with a map and a Hacknet app.The Hacknet app was built on the Localz platform and enabled players to find the clues, which became visible on their phone when close to a beacon.

Having done that, we can think about using the same idea for variety of games. This does not have to be Angry Birds or FIFA. Micro-location technology can transform simple but fun games like hide and seek. Mobile and console games have already taken over the Internet space. Combining the virtual games with physical games would bring new aspects to the gaming world.

Beacons could be installed near playgrounds and schools to make the interaction between children more frequent and effective. It can also be beneficial to have that technology from a parents and teachers point of view. They would be able to track the children’s exact location during lesson breaks.

By using micro-location technology, console and mobile games can add real-time experience for the players. Battlefields and labyrinths can be brought to the physical world. Like the treasure hunt game, other existing games could be combined with mobile apps to attract players and boost competition. Outdoor games can be brought back to the streets. It would be pretty great, wouldn’t it?

What game do you think could be transformed with beacons? Tell us your opinion below:

Localz is a Finalist in the Australian Supply Chain Awards 2017

Whitepaper: Why Do Smartphone Users Allow Access To Location?